Do you know the differences between American football and soccer?

Last weekend, the NFL annual championship game took place, the Super Bowl; this event is worldwide known, although mainly watched in the United States of America. This fact made us think about what we know about American football, and, apart from this great event, we do not know anything about this sport, just what we hear on TV about it. Thus, we created a few guidelines for learners.

The objective of the game is easy: to get to the end of the area (the Touch Down area) while possessing the ball in order to earn points. However… do you know what are the similarities and differences between American football and the kind of football we know and love here, called also soccer?

Here, we present you some of the main differences between both sports:

Both sports have in common the number of players, which is 11 players per team, two teams in a match. Nevertheless, while in soccer (our kind of football) the objective of the players is the same, in American football each team is assigned a function that rotates, depending on three different rosters: 11 attackers, 11 defenders and 11 from a “special team” (who are the ones that kick the ball).

In soccer, as we know, FIFA only allows three exchanges per match, while in American football there is no limit for them, although they have to be made during the breaks that are in the game.

An American football regulation field is about 100-130 yards long and 50-100 yards wide, in other words, a rectangle of 100 meters long and 50 meters wide. These fields have marks every 5 yards, and, in both sides of the field, there are finish or goal lines, which indicate the entrances to the back areas (of about 9 meters).

In soccer, or football, the game is played in a rectangular pitch, which is about 90-120 meters long, and 45-90 meters wide. The field is divided in half by the halfway line, which includes a kick-off circle and two penalty areas in each opposite end. 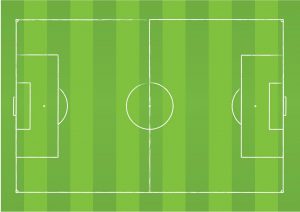 Scoring in American football can be done in two ways, and, depending on how and when it is scored, it will be worth more or less points. The first way, known as Touchdown, consists of crossing the finish line while possessing the ball; the other method requires throwing the ball with a kick and make it go between two vertical goal posts.

In soccer, the ball must completely pass the goal line between the line of the goalposts, and under the crossbar that form the goal, so that it can count as scoring of a goal.

In soccer, a leather ball is used (or another standard material) with spherical shape and weighting from 396 to 453 grs. However, the American football ball is made of inflated rubber and covered by leather or rubber; its shape is a long spheroid whose weight varies from 397 to 425 grs.

American players wear uniforms with helmets that cover most of the face, apart from shoulder pads and plastic protective clothes, very light and quilted that cover most of the body in order to protect these parts for the violent physical contact. On the other hand, in soccer, the basic apparel is formed by short-sleeved shirt, shorts, shinpads, knee-length stockings and boots.

Soccer is divided in two halves, each one lasting 45 minutes and divided by a break of 15 minutes. American football, on the other hand, consists of four periods, called “quarters”, each one lasting 15 minutes. There is a 15-minute break between the first two quarters and the last two, during which the players can leave the field.

In both sports, the break period means a exchange of the halves of the field: each team changes their position in the field.

8. Development of the action

An American football match, as well as a soccer’s, begins by flipping a coin, which decides in which half of the field will start playing each team, but also which team will start attacking and which defending. After this, the defending team puts the ball in its 30 yard and kick it as far as possible. A player of the attacking team must up the ball and will try as well to run as fast as he can before he is knocked down by someone from the enemy team.

9. Progress of the ball

In soccer, only the goalkeepers can use their hand, as the rules state, to touch the ball, provided they are in the area. The rest of players must try to score a goal in the opponent’s goal by using any part of the body but the hands and arms to drive the ball in the right direction.

In American football, in each turn, the attacking team can pass the ball as many times as he wants backwards or towards the sides but just one forward, and only when not surpassing the line in which the turn began.

Unlike our goals, each one scoring a point, in American football there are, as stated, two types of ways to score: the Touch Down, which is worth 6 points, and the Field Goal, which is worth 3 points. After a Touch Down, the offensive team may choose between two plays from the yard: to make a Field Goal for 1 point or to try to make another Touch Down worth 2 points.

We can compare, more or less, a 1 point soccer goal to a Touch Down plus an extra point. It is to say, in a soccer match in which the score is 4-2, the same quantity of score in an American football match is translated to a 28-14 score points.